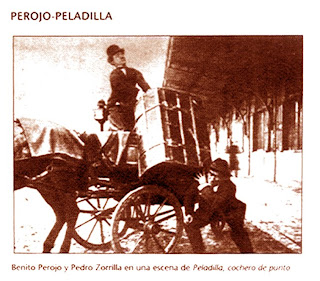 Benito Perojo (1894-1974) had a succeessful career as Spanish-language film director and producer for MGM, Fox, and his own company, Benito Perejo P.C.
His entry into cinema began when he co-founded the production company Patria Films in 1915. Through Patria, Perojo made a name directing and starring in five comedy shorts featuring his character Peladilla, a frolicsome wanderer clearly patterned after Charlie Chaplin.
A short (and rather violent) clip of Peladilla in action can be found here.
Posted by The Faux Charlot at Monday, August 30, 2010