While researching Charlie Chaplin impersonators online, I came across the photo below, which piqued my interest, and I knew I had to research performer Ronnie Collis further. 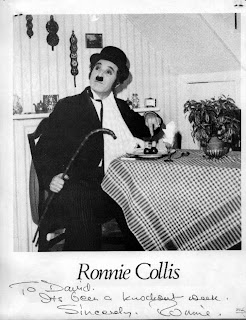 Having seen footage of his routines online, I can say Ronnie was a truly top-notch Charlie. I spoke briefly with Mr. Collis's widow, Belinda, via email, and she granted me permission to reprint a biography and a few photos of the late Chaplin impersonator. 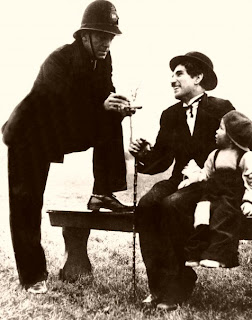 (From the Chaplin Stage School website)
Born in the East End of London on 5th August 1928, it wasn't long before Ronnie realised he had a particular aptitude for tap dancing. When his father took him to a dance school aged only 6, the teacher took one look at Ronnie's tapping and declared, "I'm going to make him a champion". And he was. Ronnie won the All England Tap Dance Championship in 1937 & 1938, which was followed by the British Championship. Ronnie entered show business at the age of 14 and during his career he appeared at almost every major theatre in Britain as well as touring abroad. he appeared alongside many stars of the theatre including Max Miller, Roy Castle, Bob Monkhouse, Harry Secombe, Ken Dodd, Des O'Conner, Jimmy Tarbuck and his close friend Engelbert Humperdink. 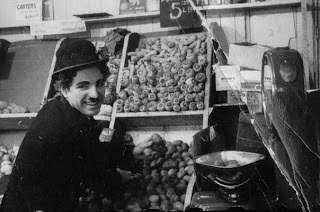 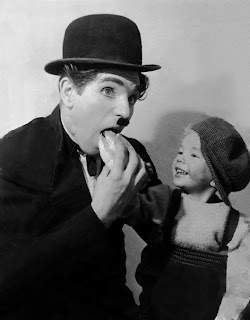 He was particularly well known for his portrayal of Charlie Chaplin, a routine which he perfomed on many occasions both in the theatre and on television. 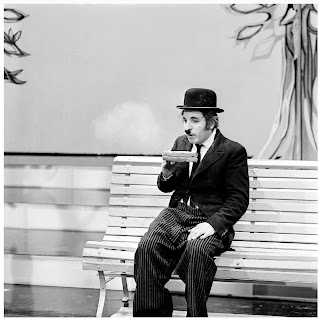 In 1986 together with his young wife, Belinda, he founded Chaplins Stage School, named after his variety act. Ronnie could always be found doing things around the school and was well loved by all the children, whom Ronnie loved in return.
Ronnie helped Belinda run the Stage School until his untimely death on 9th October 2000.
More information about the Chaplin Stage School of Dance can be found here.
Many thanks to Belinda Collis for allowing me to share photos of this versatile performer.