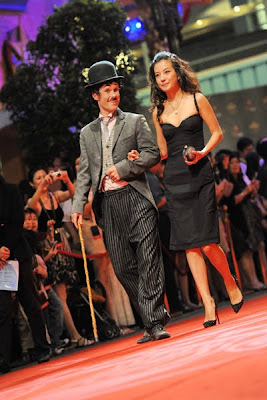 Chinese film actress and pop singer Vicki Zhao Wei (R) walks with a Charlie Chaplin impersonator on the red carpet upon arrival at the grand opening of Universal Studios Singapore at Resort World Sentosa. Universal Studio Singapore's grand opening kicked off with the metamorphosis of the park's Hollywood and New York zones into a glamorous gala dinner party for some 1,600 invited guest.
Posted by The Faux Charlot at Monday, June 06, 2011