Eugene DeVerdi: It Happened in Hollywood, 1937

I just rented the 1937 film 'It Happened in Hollywood', which can be found on Netflix. This film is fascinating because it features many 1930's era celebrity impersonators playing famous faces. Toward the end of the film, Richard Dix throws a party for all his 'celebrity friends', and one by one the stars come by the pay their respects. It's fascinating.
The Charlie Chaplin look-alike is especially good. He's the right size, has the right look, but his movement is rather stiff. He almost looks like a wind-up Chaplin toy. His name is Eugene De Verdi, and I found an old Life Magazine article on both him and the film. He has some great little bits in the film (including a weird fisticuffs duel/possible dance-off with the fake W.C. Fields!)
Take a look!
Click on images to view detail 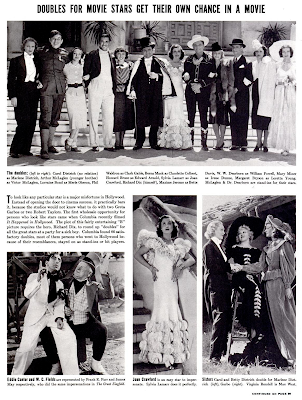 In retrospect, I now believe this photo below to also be De Verdi. I had originally posted this photo as an unknown impersonator, advertising Chaplin's 'Modern Times' in the streets of California. 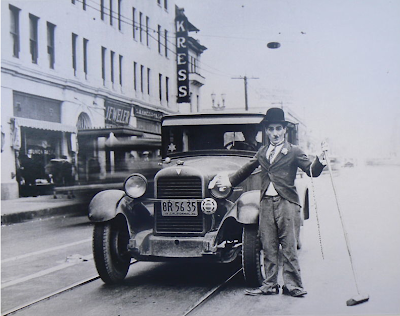