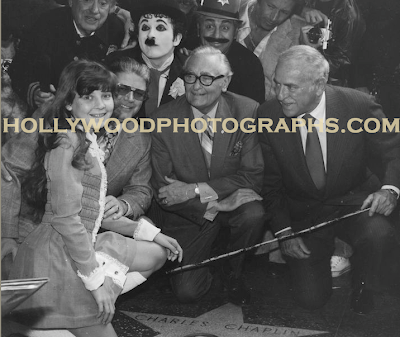 Susan Maree Chaplin at her grandfather’s Walk Of Fame ceremony, 1972. Susan is the daughter of Charles Jr (the first son of Charlie Chaplin & Lita Grey).
Chaplin’s name was omitted from the original list of stars to appear on the Walk Of Fame in 1956 because of ill feelings about his left-wing politics at the time. Many property owners said that if Chaplin’s star went in, they wanted out. In 1960, Charlie Chaplin, Jr sued the Hollywood Chamber Of Commerce because of his father’s omission. It would take several years and Charlie’s return to the states before the issue would finally be resolved. Charlie Jr fought very hard for his father to get a star but, sadly, did not live long enough to see it, he died of alcoholism in 1968—he was only 42.