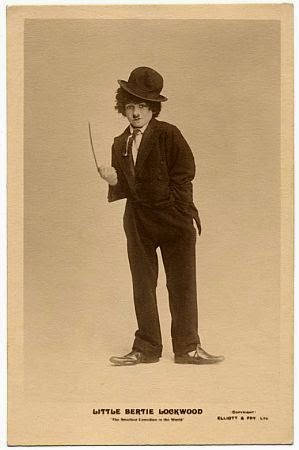 A postcard photograph of Little Bertie Lockwood (active 1917-1918), ‘The Smallest Comedian in the World,’ a pupil of Lila Field’s dancing school at Heddon Street, Regent Street, London
(photo: Elliott & Fry Ltd, London, 1918)
At the King’s Theatre, Hammersmith, pupils of Lila Field appeared in The Marriage of Oberon, a masque by Lewis Cornwall with music by Jean Mars, and Love and Kisses, a musical phantasy by Thomas Courtice. Bertie Lockwood appeared in both productions, but for the latter the ‘idea of doubling has no terrors for Bertie Lockwood, and in this piece he is seen in three parts – Jacob (the Cat), the ”Tommy,” and Charlie Chaplin. As the ”Tommy” he sings ”Oh! Oh! It’s a lovely war” in a manner which gained for him a deserved encore on the occasion of our visit.’
(The Stage, London, Thursday, 16 May 1918, p. 12c/d)
Posted by The Faux Charlot at Thursday, August 14, 2014